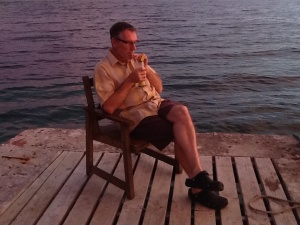 Friday 12 April
Had a shower of rain this afternoon but managed to squeeze in our 3 hour breakfast and very short snorkel. The wind had picked up after lunch and the undertow was very strong. But we decided to go anyway.
It only took about 10 minutes to get to the reef before we jumped in and started floating around seeing heaps of fish including an amazing iridescent purple star fish… all very enthralling… Until one looked up and saw the boat becoming smaller by the second drifting withe current  away from us as fast as we drifting towards Fiji.
Now Kotoni has seen too many late night films and had visions of the abyss as the seabed suddenly disappeared and we were snorkelling over a depth where the bottom was too far down to be seen.
With a hand raised he alerted the boatman to come to the rescue and we were back on shore after the swiftest snorkel in history.
Saturday 13 April
Sally, a fellow volunteer arrived on the morning boat for an overnight stay. We duly greeted her at the wharf… welcoming her to ‘our’ island as we feel a sense of ownership – also showed her to her fale next door to ours. After the mid morning snorkel it was lazing, reading and relaxing before fish dinner… How will we ever adjust back in the metropolis of Nuku’alofa let alone Australia!!!
Sunday 14 april
Last day in Atata… Some day trippers turned up… We are upset that OUR island is being invaded!!!  Usual routine of activity or lack thereof!
crab salad for lunch before boat back to mainland at 4… It has been another magic escape from the hubbub of town life. 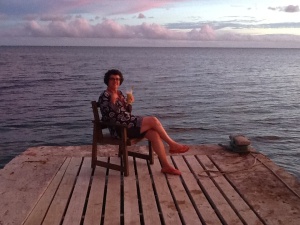 3 thoughts on “Atata is now OUR island!”