17 august Saturday
This must be a first… went to collect Gina from the airport and her flight was 15 minutes early!!! The magazines and books we’d taken to kill time didn’t even get opened and we were soon home sipping gin and tonics and catching up on her Vava’u travels.
That evening we dined at under a large sprawling frangipani tree at the Cottage Breeze restaurant to celebrate Fiona – one of the volunteer’s birthday. I reckon I had one of the best fish burgers ever washed down with a Maka beer. Earlier we had been to Alliance Francaise to an exhibition opening where instead of a glass of wine we slurped fresh coconut juice and nibbled on watermelon slices… Very tropical! 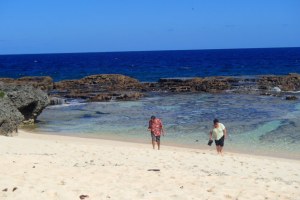 18 august Sunday
French toast and grilled tomatoes fortified us for the East/South Coast tour. The fishing pigs were out snorting on cue and we even saw a few whale spurts from the southern cliffs before relaxing at our newest discovery… Secret Beach… what a gem. We had heard about this beach but just hadn’t been able to get comprehensive directions… until now. Nothing in Tonga is signposted so following and giving directions is fast becoming an art form and a necessary survival skill.
It is a little cove nestled under a coral cliff and the sand was some of the finest we have seen. it is a bit of a slow slalom drive down through the coconut palms and one must overlook the garbage left by thoughtless campers.
Kotoni and I intend to return with gloves and garbage bags and do a BIG clean up as it so detracts from the rest of the location’s natural attributes. Litter is just as big a problem here as it is everywhere.

The tide was coming in so the reef enclosed rock pool slowly filled with each wave of water. Gina and I sat in the shallows trying hard to be stars from ‘Here to Eternity’ and soaking up the gentle winter rays.

We had sundowner drinks at the Fisherman’s Club… One of the few spots open on a sunday and where you often come across interesting people including a young American couple who had sailed from the US in a yacht. I am always intrigued by people’s stories and this couple did not disappoint. She was a 20 something math teacher from Reno and had flown to the Marquesa islands to join her boyfriend for a sailing leg before flying home from Tonga. He had been sailing for 18 months with a mate with whom he’d bought the boat. Neither had ever sailed before. I thought they we all so very brave… Made me think of my dear friends Tracey and Barry in Hobart who have taken to sailing with relish and have plans to take off sometime in the future and explore life on the waves. Kotoni and I are definitely more the land lubbing types!

19 august Monday
Gina and I played in town and met up with Evelyn a long term palangi married to a Tongan who had made contact with me after I’d made a call out for some quilting advice for the sewing teacher. After lunch with Kotoni we headed home before dining out on pizza in Marco’s garden restaurant. We presented him with a slab of lindt chocolate as a thank you to his lasagne delivery last week when we dined at the Korean restaurant!

20 august Tuesday
Drove Gina to the airport in the school van after a delightful lunch at ‘Ahopanilolo staff room with everyone. We have a little over a week now before our next guests Lesley and Stewart arrive from Kingsciff. I doubt they will have much of their own luggage as we have sent so many requests via our Australian agent (aka Mum) … This order includes everything from guitar strings to knives and foot cream!