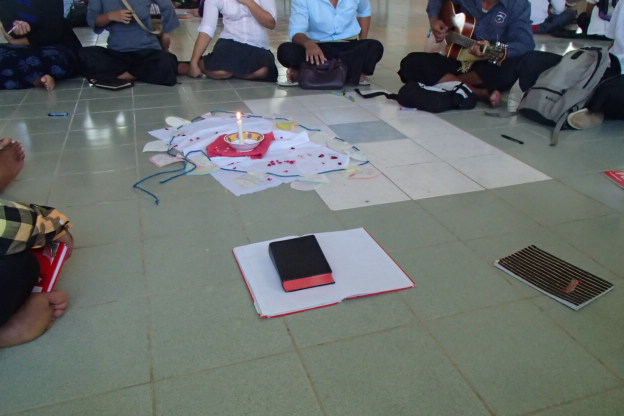 11 Sepitema Pulelulu
Year 1 reflection retreat began with everyone seated in circles on the church hall’s tiled floor. Within our circles we were asked to share thoughts and feelings. Although mostly in Tongan, Alexi spoke in English about how candles light so much hope across the world. People light candles in churches and come together. Hearing such poignant thoughts from a young person was encouraging and inspirational. It was a most serene start to the day.
Sr Annuncia facilitated the session in her usual gentile way. We were given heart shapes of paper and were asked to write on one side… Who loves us and who we love. Could be names or symbols. Along with this, we were asked to write our favourite bible (or other sourced) quote… they are always inclusive and conscious that not everyone is catholic or even religious. (I checked and Gordon had me at the top of his heart…lucky!)

On the paper’s flipside side we wrote the name of someone we wished to say sorry to… Along with a virtue… again we could  use symbols. The hearts were stapled to some twine and placed around the candle while everyone sang. After a tree visualisation we were asked to go outside and find something special from nature that reflects ourselves. I chose a beautifully textured old leaf to symbolise the wisdom and beauty of age and experience.
Lunch was served and prepared by the second year students.
Everyone was feeling sleepy after the big Tongan portioned meal of fish, tapioca, chicken noodles chocolate cupcakes and fruit salad.
Back in the hall we wrote a dream on a small slip of paper, rolled it up and put it in an inflated balloon. Balloons were collected and redistributed. We popped our balloon to retrieve someone else’s dream inside… we were asked to join their dream to ours.
A quick dash home to pick up Bas and scooter downtown for the candle making youth in business presentation followed by ice creams all round. 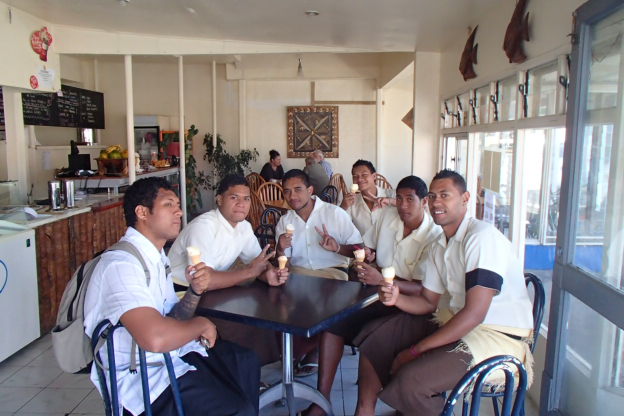 On the way back to school, Kotoni and the sisters did a deal at a pop up shop near the wharf purchasing three guitars, two mikes and a couple of plugs. It was like an impromptu concert as the students strummed away and sang by the roadside. If Sister Keoma hadn’t been there I am sure everyone would have thought there was a big drug deal going down!!! 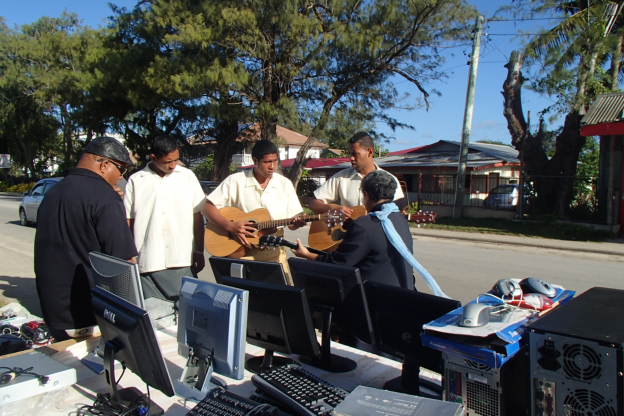 12 Sepitema Tu’apulelulu
Sent Lesley and Stewart off to Atata island… It was quite windy so they could be in for a wild ride on the boat trip across the open seas. Thought we’d go low key and have a yummy takeaway goat curry….zzzzzzzzzz wrong! Plan F – ended up being a Chinese after Kotoni and I zipped all over Nuku’alofa looking at options! Never mind.

13 Sepitema Falaite (Happy birthday to nephew Ben, Aunt Liz and Snod)
After language Saane kindly leant us some Tongan garments and dressed Stewart and Lesley in tupenus, a ta’ovala and kie kie and off we went to have a quick tour of the school where Stewart helped out with a roof estimate as part of a potential Swiss solar grant.
We then headed up the road to a feast with over one thousand people.

A local new church was being consecrated and the celebration was held in the huge grounds of a royally connected Noble’s house which we pass each day on our way to school. Apparently in its heyday the house rivaled the King’s palace for opulence but after some family disagreement it has become derelict after laying empty for the past 17 years. We also heard that the noble came undone doing some overseas pumpkin deal with locals. The 1000 people+ attending the feast were treated to the usual over abundance of food. We sat at  Feliti’s table (Áhopanilolo student) and watched the dancing and antics unfold. After grace everyone tucked in and before long started to gather the chocolates, packets of biscuits, pig legs etc etc and shove into their bags or whatever they could find to transport home!

Lesley and Stewart later had a massage with magic Mike and his dad, Kotoni and I went to a youth in Business awards ceremony then we all went to a cultural show on the edge of the lagoon. Stewart was happy as he got to devour puaka (pig) twice in the same day and taste a little Tongan kava.