Hired a car for a little island tour out to the west coast beaches and blow holes before a volunteers lunch at the Pot Luck restaurant.

While driving around we discovered that Mate Ma Tonga has blitzed the Cook Islands and so people were out on the road celebrating in any way they could!

Vicki also had the school tour and was able to witness the delight of everyone as we handed out the 1kg of printed photos she had couriered over for us. The afternoon escaped us but we managed a drive out to the lovely little Keleti beach for cappuccinos and a snorkel which was terrifically refreshing.

Home for a quick shower and out again to a delightful art exhibition opening. Sally is an American who has been here for 8 months on a Fullbright fellowship. The works reflected her Tongan experience and it was a wonderful opening with installations and computer manipulated iconic Tongan imagery printed on white plastic vinyl.

We drank cups of Otai – a traditional watermelon and coconut milk beverage and ate Fekakai at sweet caramel dumpling served on wedges of banana trunk ‘plates’. A singing kava circle was set up with the kava being served from little scrubbed coconut shell a little portable loo! A tau’alunga dancer emerged from a little coconut thatched room completing the evenings art events. I actually had a taste of kava this time. It wasnt too bad. Kava looks like muddy water and left a pleasant aftertaste after an initial bitter first sip. Not something I would actively seek out but not as bad as I thought it would be. We ended the evening around the corner in Marco’s garden munching pizza. He has promised us he will have fresh gelato next week… so we shall have to take the Princess back.

After a couple of hours sleep did another 2.00am pick up to collect Tajeen’s parents and thank goodness they arrived safely. At 8.30am I took Vicki to the airport as she was going to Ha’apai for a few days diving. Dropped the hire car off and walked to school in time for the next gig: an afternoon being treated like nobles. 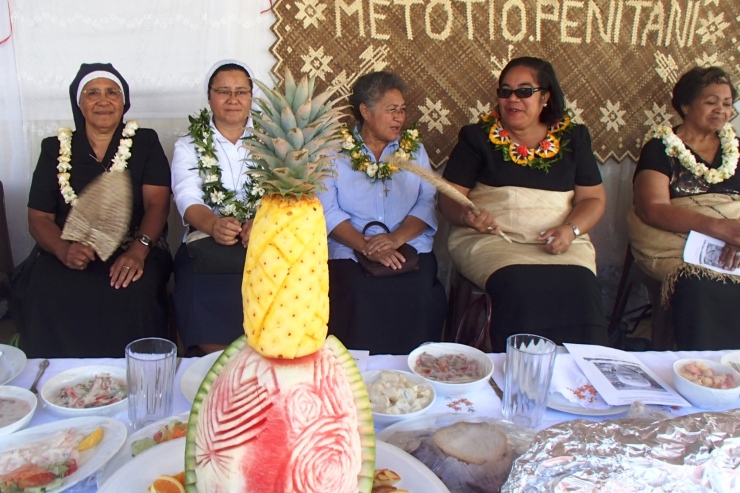 It was the 12 month anniversary of Leni (Kotoni’s Tongan ‘counterpart’) grandfather’s death and 300ish people were assembled for a feast in her mum’s front yard. Being on the ‘top’ table we were given flower garlands and offered special dishes of mussels, prawns, salads (well two small ones!), beef, chicken, a puaka (pig) of course. There was also a beautiful carved watermelon with a pineapple perched on top as a table centrepiece which we later devoured.

There was a full-on band and a program of activity that took us floating through an amazing afternoon of cultural dancers, tapa wrapping and unwrapping, singing and general merriment tinged with emotional speeches. Such a privilege to share in this colourful and moving event. 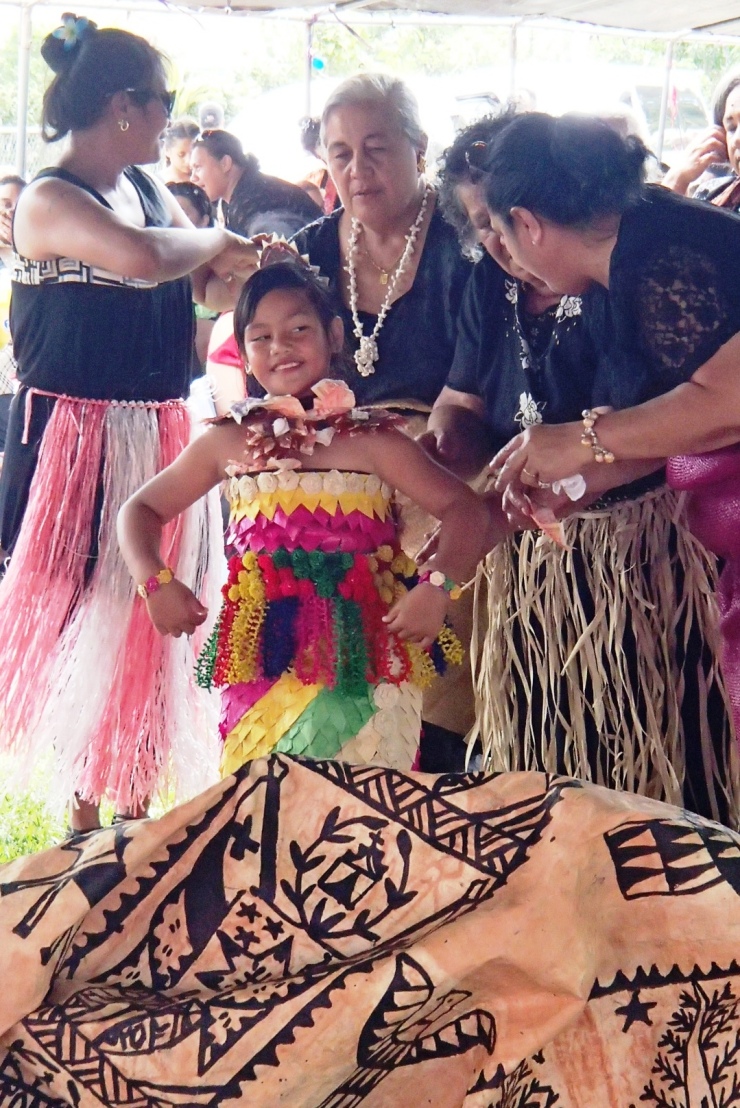 I fell on the bed at 5pm and woke up the next morning at 6.00pm! Mana our new Tongan friend had called to come for a birthday umu dinner out at the beach… but we just couldn’t do it all over again.

School is really winding down and the energy is now focused on those having to re-sit practicals or written exams, finalising assessments and prizes as well as the end of year graduation, singing practice for the mass, ball and parties.

My job description has expanded again and I am now a speech writer… Helping Malatina with her MC role at the graduation ceremony.

2 thoughts on “Tonga rugby win and some great art”